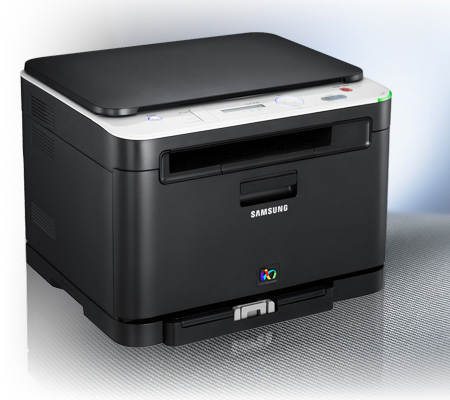 When another cheap laser printer went south, I went looking for a new ‘multifunctional’, as Samsung calls it. I noticed that color laser printers have become cheaper and cheaper too. After a lot of comparison, I bought a Samsung CLX-3185FW multifunctional color laser printer, for about €250. This review is written from the perspective of a real user. I’ve used this printer for over two years for my home office.

On the bright side

Yes, it’s quiet for a printer and it uses little energy in sleeping mode. It’s more than fast enough for the occasional print in my home office. The navigation is straight forwarded. Changing cartridges almost can’t go wrong. It looks nice. It’s not that big for a multifunctional laserprinter.

On the dark side

The ‘one touch WiFi’ was a disappointment. It just didn’t work at all and the manual is far from clear on how to get WiFi networking going (even manually). You need to have a wireless router that supports the one-button trick and even then this doesn’t necessarily work. I’m speaking from experience.

Worse: Even after hours of trying, the manual at hand, I could not get the printer to work wirelessly with my iPhone or iPad. The Samsung Mobile Print app is a joke and their support (via email) doesn’t react to mail. The Samsung customer service is not a big help either. Finally, I decided to give up and connect it via USB. Disappointing, because this is one of the reasons I choose this model, and I think a lot of people would find this an appealing feature. For a PC it doesn’t matter that much, but most of us own at least one laptop or iPad or similar device that is used wireless only.

At first, I was still quite content with this printer, even though it smelled a bit chemically after each print. I don’t print that much so that wasn’t a big deal. Then, I noticed that the scans and copies it makes, are very dull. They have very little color and they lack sharpness. I don’t use a lot of copies, but it was definitely a step back from the Canon Pixma MP540 I had before.

When printing from some applications, like Adobe Illustrator, the printer (driver) didn’t print as pure black as it did from other applications, like Mail. There was nothing in the manual about this, and nothing online, so I called the helpdesk. They had no clue. They promised me to investigate it and contact me about the mysterious ‘svart optimalisering’ option that I thought might have something to do with it for several times, but they never did.. I wrote an article about this svart option and how to print 100% black in Illustrator too.

On the long term

As with almost all consumer targeted printers, the profit must come from the ink or toner cartridges.

About 1,5 years after purchasing this laser multifunctional, it needed new color toner cartridges too. Theses also cost about € 30 ~ € 35 each. This add up to over € 100 per set, and this is for a ‘B’ brand, not the even the official Samsung cartridges.

This printer doesn’t deliver what it promises. It’s smelly, toner is expensive and most importantly: The prints and copies are worse then you get from an inkjet printer in the same price range. The Samsung customer service is no help.